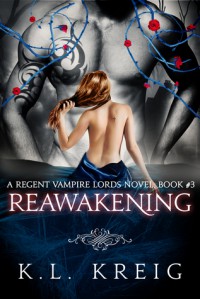 Romaric Dietrich was as noble as I had hoped and bravado...Wow! I love how he held back at times but was more than the over-the-top classic vampire predator at other times. The sex as usual was awesome; I am beginning to think Mr. K.L. Kreig must be grinning somewhere or hiding under a table. Ha! I hope it is not the latter - kudos for such inspiration.

The villain went in a flash. I re-read the section wondering what happened; nevertheless I felt convinced enough to accept his fate as we have two blossoming love stories to look forward Giselle and Jake and Geoffrey and Beth. Well maybe three … there is a European Lord now who may be well matched for a certain aunt with a striking resemblance to someone’s else Moira.

Keep writing and we will keep reading!